Her Majesty's Colonial Steam Sloop Victoria,
dressed for the visit of Prince Alfred, Duke of Edinburgh in 1867

The HMS Victoria was also referred to as HMVS (Her Majesty's Victorian Ship) or HMcss (Her Majesty's Colonial Steam Sloop). She was a 580-ton combined steam/sail sloop-of-war built in England in the 1850s for the colony of Victoria. She was the second warship to be built for an Australian colonial navy, the first British-built ship to be given to a colony of the British Empire, and the first Australian warship to be deployed overseas.

Construction and acquisition.
Victoria was the first warship to be built in England for one of the British colonies. She was the second ship ordered for an Australian colonial navy, after the Australian-built gunboat Spitfire for the New South Wales colony. She was designed by the British naval architect Oliver Lang and launched in London on 30 June 1855 by Lady Constance Talbot. Commander William Henry Norman sailed the Victoria from Plymouth to Hobsons Bay, arriving on 31 May 1856. The ship was equipped with eight 32-pounder guns.

Operational history.
Victoria's main duties were to protect the colony of Victoria, conduct hydrological surveys, recover passengers and crew from stricken ships, and serve as a lighthouse tender. During her career the sloop delivered the first trout eggs to the colony of Tasmania.

New Zealand Wars deployment, 1860.
In 1860, the colonial government of Victoria decided to send the sloop to New Zealand, to support British colonists fighting in the First Taranaki War. On 19 April 1860, Victoria sailed to Hobart, embarked 134 troops from the 40th Regiment of Foot, and transported them to New Zealand. Prior to her departure, the colonial government passed an Act giving the ship legal status, but this law was overturned by Britain as an attempt to create a naval force independent of the Royal Navy. After delivering the solders to Auckland, Victoria performed shore bombardments and coastal patrols, while maintaining supply routes between Auckland and New Plymouth. In July, she sailed to Sydney to transport General Thomas Pratt and his staff to New Zealand. Victoria was used to evacuate women and children from the town of New Plymouth, following Maori attacks on the town's fortifications. In October, the ship underwent refit in Wellington, and resumed duties by delivering British reinforcements to the combat areas. As the Victorian colonial government required the ship for urgent survey work, her return was requested at the end of the year, with Victoria arriving in Melbourne in March 1861. The New Zealand Wars deployment was the first time an Australian warship had been deployed to assist in a foreign war. The legal hazards of having a colonial warship operating outside her territorial limits was rectified by declaring that all Australian warships in international or foreign waters had to be commissioned into the Royal Navy. 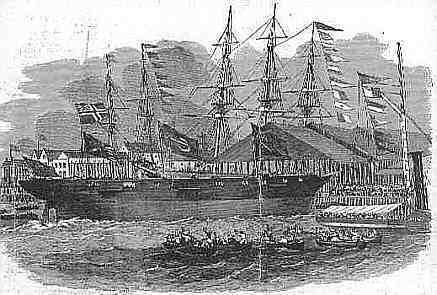 The launch of the Victoria in London, 1855. (Illustrated London News)
Image from: Defending Victoria website.

Search for Burke and Wills, 1861-2.
When news reached Melbourne in July 1861 that the explorers Burke and Wills were missing somewhere between Cooper Creek and the Gulf of Carpentaria the Royal Society of Victoria decided to send a number of search parties to search for them. Commander William Henry Norman sailed from Hobson's Bay in the Victoria on the 4 August 1861 for Brisbane, where William Landsborough and the Queensland Relief Expedition boarded. The Victoria arrived at the Albert River in the Gulf of Carpentaria at the end of September 1861. After finding traces of the explorers, they returned to Melbourne on 31 March 1862.

1862 onwards.
In 1867, Victoria was present for the visit of Prince Alfred, Duke of Edinburgh—the first member of the British Royal Family to visit Australia. By 1877, Victoria's armament had been altered to include one 10-inch gun, two 13-pounders, and two 3-pounders. 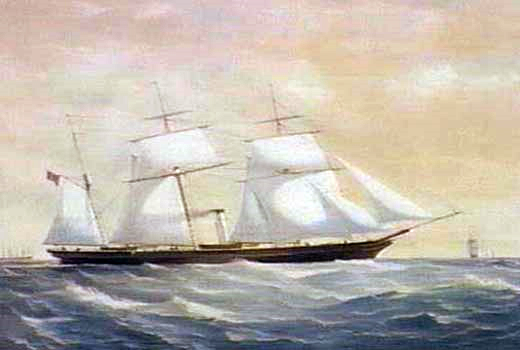